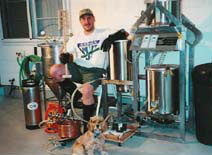 This beer was orginally going to be a clone of Hopzilla, but when he made this, Jim realized that he liked his own version better - in other words, he's a lot like most brewers! Jim is well-known to a lot of people, not by name but as a result of an idea: he is the founder of our B3 Pro-Series option for our BrewSculptures. When he came to us with his idea to use clover clamps on a homebrew system, we knew he was an all-right guy! As a result, we had to have him immortalized in our Signature Series line-up. Jim's beer has a nice malt backbone and a really intense hop flavor. Jim recommends using White Labs California WLP001 yeast. Read his version of the history of this beer here:,,"I began home brewing in 1994 at which time I purchased my first beginning home brewer kit. It consisted of the normal basics that you find in almost all beginner kits. I immediately fell in love with brewing my own beer and continued as a partial grain/malt extract brewer for several more years. It was after a short brewing hiatus that I attended my first Great American Beer Festival where I encountered the beer that inspired me. In 1998, Grant's brewing company brewed a special batch of beer specifically for the beer festival. The beer that made such an impact on me was none other than Hopzilla. I was so taken by this brew that my brewing hobby was rekindled and I decided it was time to further escalate my hobby. With intent to purchase an all grain brewing system, I began to get serious about researching the available brew systems at that time. During the year 2000 I inspected a few other all grain brewing systems, I decided to go with Beer Beer and More Beer, however, they didn't quite have what I wanted. I was the first customer to launch what has become the Pro series. My philosophy was I wanted the best of the best of the best, and Beer Beer and more beer almost had it. My wish became Beer Beer and more Beer's delight in producing the first all stainless steel, tri clover fitting, digitally controlled space age cooling auto pilot, set it and forget it, you can do anything the professional do and better, B3 1550 pro series brewery. With a very aesthetic control panel to boot. This was the beginning of a beautiful friendship. Now many know me as the Great Grandpa of the 1550B3 Pro-Series System. Although my original B3 System now looks archaic compared to the current systems; it is as functional as ever. In addition, with more than 400 gallons brewed on it I enjoy it every bit as much today as I did when I bought it. This enabled me to begin on my quest to brew a better beer than "Hopzilla". I have what I feel is a comparable if not better beer than Hopzilla, it's "HOPMOTHRA!" Hopzilla's nemesis. It also enabled me to complete my "happy place", Jim's Tavern and Pub Club. I hope you enjoy. Cheers, Jim,,Estimated Original Gravity:1.067-71,SRM (Color Range: 11,IBU's: 55-59 Estimated Alcohol Percentage: 6.7%,,,Our recipe kits DO NOT include grain bags or yeast. The recommended yeast(s) can be found below. All grains will come milled unless otherwise requested at the time of purchase.