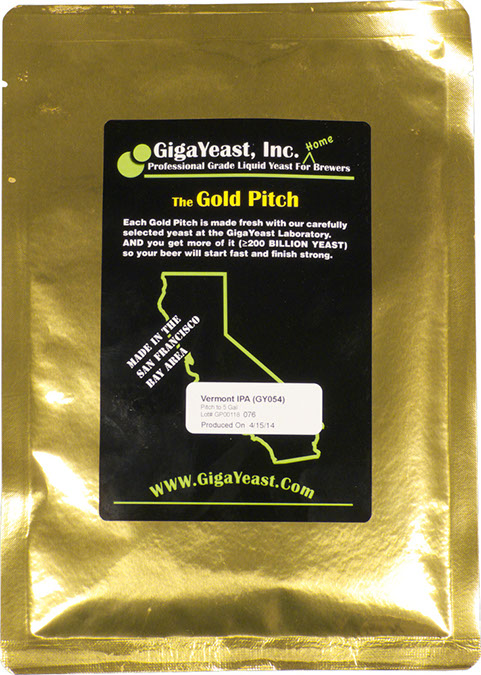 With 200 Billion Yeast Cells per pack, GigaYeast features nearly double the cell count of other liquid yeast producers. This equals faster starts, better flavors, and more insurance that your beer is going to turn out well. Double the yeast for just a little more money.  Smart brewing.,The NorCal Ale #1 Strain,Clean Fermenting, versatile strain from one of the most famous California Pale Ales.  Neutral flavor profile creates a crisp beer and allows hops to shine.  Strong attenuator and good flocculation perfectly suited for a large variety of styles.  Good choice for high gravity beers.,More On Cell Count,200 Billion cells per pouch means that with one pounch you can attain the gold standard of pitch count of .75 million yeast cells for every milliters of wort  for every degree plato for nearly any beer you will make. 200 billion yeast cells is also fantastic if you are making 5 gallons of high gravity beer and don't have time to make a starter.  Saves money if you are making 10 gallons and only want to buy one yeast. Getting twice as many cells per pack versus the other brands is also a great idea for mail order shipment, which can be a little tough on liquid yeast., ,Attenuation Medium Gravity*:  76% – 80%,Attenuation High Gravity*: 78% – 80%  (10.5% – 11.0% ABV),Temperature Range†:  64??F – 77??F,Flocculation:  Medium,Style Uses:,,,India Pale Ale,,,Pale Ale,,,Barley Wine,,,Stout,,,Bitter,,,ESB,* Attenuation was measured after 8 days with Ale yeast at 70??F and Lager yeast at 50??F.  Medium Gravity is 14?? – 16??Plato.  High Gravity is 23??- 25??Plato.,†  The working temperature range represents the range at which fermentation for a given strain produces a typical attenuation- not necessarily the ideal temperature for your particular beer style.  As a rule of thumb, start ale yeast fermentation at 68?? – 72??F and then lower or raise temp as desired.  Lager Yeast are typically fermented at 45?? – 58??F.  If desired, Lager Yeast can be given a “hot start” at 65-68??F and then lowered to the primary temperature after active fermentation begins (10-20hrs)., ,